Mr. Sheehan was born and raised in Fairbanks, Alaska, and received his Bachelor of Science degree in Business Administration from Clarkson University in Potsdam, New York. After receiving his Juris Doctor in 2004 from the University of Denver Sturm College of Law in Colorado, Mr. Sheehan returned to Alaska to practice and settle in Juneau. Prior to joining Simpson Tillinghast Sheehan, P.C., Mr. Sheehan clerked for the Honorable Patricia Collins, Superior Court Judge for the State of Alaska.  Mr. Sheehan is a member of the Alaska and Juneau Bar Associations, and is admitted to practice in all relevant state and federal courts in Alaska.

While attending Clarkson University, Mr. Sheehan played on the Men’s Division 1 Ice Hockey Team, serving as team captain his senior year. After graduating from Clarkson, Mr. Sheehan played professional hockey for a year in the minors with the Bossier-Shreveport (Louisiana) Mudbugs of the Central Hockey League.

Mr. Sheehan enjoys boating, fishing, hunting, skiing, playing hockey and spending time with his two kids exploring Alaska. When he’s not in the office, you can often find him coaching his kids’ hockey team for the Juneau Douglas Ice Association. 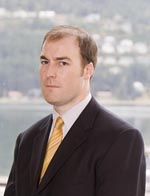